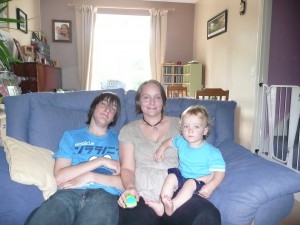 Sam was born in September 1992 at just 27 weeks weighing 1lb 12oz. His lungs collapsed and he was given a new drug which could inflate the lungs. It was 4 months before he came home – amazingly not on oxygen!

Alfie was born in November 2006 at 28 weeks. He weighed 2lb 6oz. He was in a lot better shape than his brother Sam and was breathing on his own much quicker.  However, Alfie caught a bug which was very serious and the staff at Buscot gave him every antibiotic they could think of. He took a long time to recover – and we came very close to losing our little man. Alfie came home a month before his due date – he was so tiny that we got a lot of attention when out and about and shopping.

Sam is now 17 years old and has just started driving lessons! It is truly amazing how the time flies by.  He has been involved heavily at Shinfield Players Theatre and has been in their last 2 pantos – he would love to be an actor and is thinking about doing a musical theatre degree when he finishes his A-levels. Amazing when you think of how small he was – a true miracle back in 1992.

Alfie is 3 and up to all the mischief that a 3 year old should be!  I love his attitude, he is very high spirited! He is always looking for the next thing to do and does not stay still for a minute – well not unless CBeebies is on. He is very much into cars, lorries, trucks – anything with wheels really. He is very good at naming the make and model of cars and is obsessed about whether they have tow bars or not.  A typical little boy.

I love my two boys with everything I have. I am grateful to all the staff on Buscot who dedicated so much time, energy and effort in helping Sam and Alfie.