I had high blood pressure on and off for a few years before I got pregnant and it never caused me much concern. At 12 weeks of pregnancy it was suggested I go on tablets for my blood pressure as a precaution. Apart from this I had a very uneventful first 6 months of pregnancy, without so much as morning sickness. 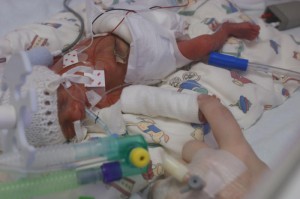 Henry just after his birth

However, in October 2008 at 26 weeks pregnant I was referred to the hospital for a check up and that’s when things started to go wrong. I was admitted to hospital immediately and shortly afterwards diagnosed with severe pre-ecalmpsia and HELLP syndrome. 5 days after I was admitted to hospital and at exactly 27 weeks gestation Henry was delivered by emergency caesarean under general anaesthetic. Henry weighed 740g (1lb 10oz) at birth.

Because of my condition it was around 16 hours before I was allowed to visit the unit and see Henry for the first time. I was scared and had no idea what to expect – this was something that happened to other people, little did I know actually how many babies are born very prematurely. Because of the general anaesthetic I had very little connection between my pregnancy and the very tiny baby I was looking at in an incubator, and I also still felt very weak and in pain following surgery. I was terrified that this would mean I would never be able to bond with Henry. 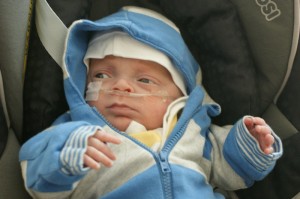 To start with Henry was on a ventilator and being fed by drip. He made a good initial progress and by day 3 he was taken of the ventilator and started to take a tiny amount of milk by tube. The milk he was given was my expressed breast milk, enabling him to get the nutrients from that early milk and giving me a very important contribution to his care (even if expressing was very difficult!). After the ventilator was removed he was put on CPAP.

Henry continued to progress well for the next few days, taking more and more milk. We started to get more involved with his care, changing nappies and giving him cuddles. He had lots of blood tests done to enable the right nutritional supplements and drugs to be given to him but this in itself took its toll on Henry and he needed a number of blood transfusions to keep up. We asked lots of questions in those first couple of weeks to really understand the equipment and charts, and attended almost all the ward rounds to ensure we were aware of exactly how Henry was getting on and being treated. Initial signs seemed good.

However, after about 3 weeks Henry contracted a chest infection and it felt like all the early progress was wasted. His breathing even on CPAP was very strained and his blood oxygen levels were constantly dropping very low. In the middle of one night we had our first scary phone call from the unit to tell us he was being put back on the ventilator and we might want to come and see him. His feeds had been stopped and a new line was being put in for nutrition. Looking at him that night made us remember what a long road we had ahead of us and we realised how right it was when people told us it would be “two steps forward and one step back”.

Henry remained on the ventilator for about a week but during that time was diagnosed with NEC. We were lucky that treatment with combination antibiotics was enough for Henry to recover from the infection, but a spell of nil by mouth meant he lost weight and suffered from swelling in his limbs. At around 2 months old (and on New Year’s Day 2009!) we had a major turning point and Henry finally came off the CPAP for – almost – the last time. He suddenly seemed more alert and interactive and he was tolerating his milk well. He was still in oxygen but being in low flow meant it wasn’t long until he was moved into a cot and we could start bottle feeding. He took well to this and by mid-January people started to talk about when we might be able to take him home.

However, we still had one very important hurdle to get over. Henry had bi-lateral inguinal hernias, which needed to be repaired. He was transferred to the John Radclif

fe Hospital a few days after his due date for the surgery, which was expected to be straightforward. In the end it wasn’t quite as easy as we had hoped – the hernias were strangulated and the surgery took much longer than expected. It is normally for a baby to be ventilated for any major surgery but the complexity of the surgery meant he couldn’t come off the ventilator for a few extra hours and he needed to go back on CPAP for a while afterwards. He was exhausted and needed intensive care for a few days afterwards. This was heartbreaking for us as we felt like we had been so close to taking him home and nowhe was back on a drip in an incubator and home looked a long way off. It turned out he just needed a bit of extra TLC to cope with the surgery and a week later he was back to his old self. 15 days after his due date, and at 106 days old he was discharged in oxygen therapy and we finally got to take our little boy home. At home he thrived and was completely free of the oxygen within 2 months.

Henry started school in September 2013 and celebrated his fifth birthday in the following November. He loves reading, role playing games and chocolate cake. He is a chatty, happy little boy with lots of friends, and is always on the go.